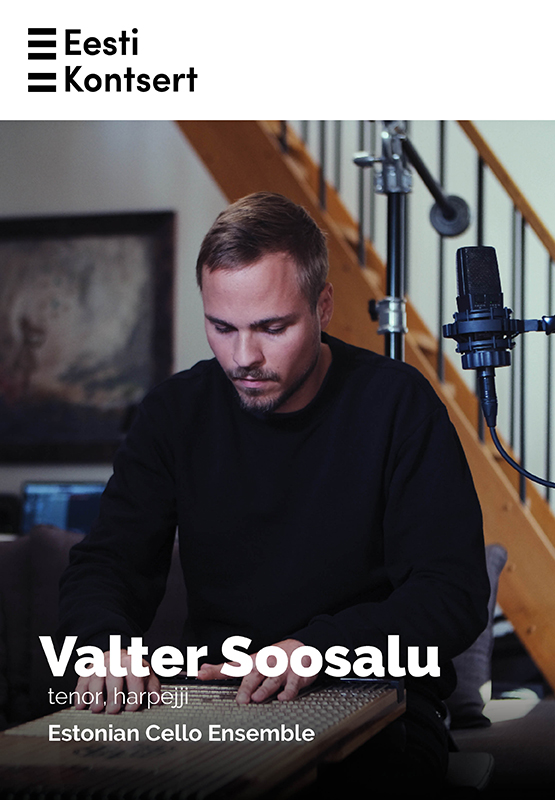 The concert programme includes original works and musical arrangements for this diverse ensemble, who have previously met on stage during several projects – the Estonian Cello Ensemble and Valter Soosalu. Their collaboration began at the Estonian Music Days 2017 when Rasmus Puur arranged for the cello ensemble a couple of works by the ensemble In Spe, a classic of Estonian progressive rock; Valter Soosalu was later invited as a soloist. On the recommendation of Erkki-Sven Tüür, the cooperation continued, and a concert was given at Leigo Lake Music. At the end of 2019, the album “Moment. Inspired by Tüür” was recorded together with the group Põhja Konn and won the title of the Estonian Music Awards Rock Album of the Year in January 2020; the ensemble won the ‘band of the year’ award. The presentation concert of the album at Alexela Concert Hall was organized by Eesti Kontsert in cooperation with Leigo Lake Music.

Valter Soosalu’s harpejji – an electric instrument developed in 2007 by American sound engineer Tim Meeks – has now been added to the ensemble’s fleet of instruments. Harpejji’s playing technique and sound are like a symbiosis of guitar and keyboard. As of 2019, there were about 500 harpejjis in the world. Since March 2020, Valter Soosalu has been a representative artist of harpejji production company Marcodi Musical Products, which organizes internationally wide-ranging training and instrument demonstrations on its Youtube channel.